A Brief History of Walnuts 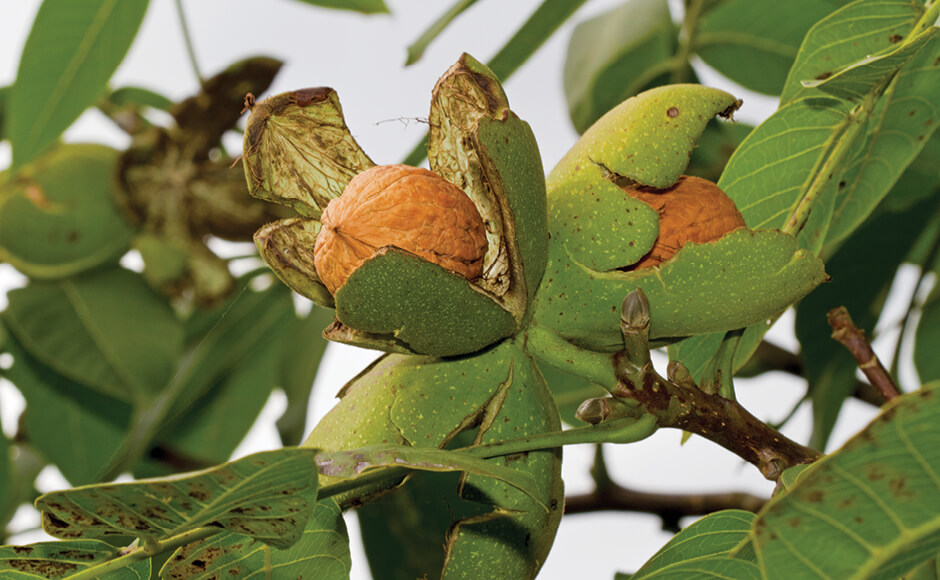 Let’s get acquainted with the walnut. All walnuts are members of the genus Juglans (established by Linnaeus), which is the old Roman word for walnut. The name Juglans derives from the Latin Jovis (Jupiter) and glans (acorn) meaning “Jupiter’s acorn,” indicating it was good to eat, since acorns were also widely consumed in early times. Although there are 21 species in the genus, in North America Juglans regia, (English walnut), J. Nigra (black walnut), and J. cinerea (white walnut or butternut) are the most widely distributed. Black walnuts and white walnuts are native to North America and are especially common in the eastern U.S. The white variety is able to exist farther to the north in regions where the growing season is shorter. Although they are cold tolerant, walnut trees do not do well at high temperatures and humidity. The English walnut, also known as the Persian walnut, is thought to be native to Asia (Iran) and parts of Europe, and was brought to America by early settlers. Commercially, J. regia is preferred because of easier cultivation and an easier-to-crack shell.

All walnuts are sizable deciduous trees with deep tap roots. The large leaves are pinnate, composed of five to eight leaflets with a single leaflet at the tip. The fruit are “culinary nuts” but not “botanical nuts.” Technically a “nut” has a hard, mostly seamless wall that does not open to release its seed. Walnut fruit are drupes, a type of stone fruit, but we’ll call them nuts. The nuts possess a hard segmented shell that encloses the meat. They develop inside a rind that comes off after ripening. Nuts from the English variety are considered milder in flavor than black walnuts.

Walnut trees, especially black walnuts, are not exactly good neighbors as far as other plants are concerned. Pliny the Elder noted two thousand years ago that walnut trees were toxic to other plants. Walnuts exhibit allelopathy, the ability to produce a substance that is toxic or inhibitory toward other species. The soil in the vicinity of a walnut tree is often rather bare, not supporting much in the way of other plant species. Walnut trees produce juglone, an organic compound that inhibits the growth of some species, while having no effect on others. Tomatoes, for example, are highly sensitive to juglone, while several shade-tolerant shrubs are not. In fact, there are more known juglone-tolerant plants than sensitive ones.

What can you do with a walnut? The trees themselves are majestic and long-lived (75-150 years) and are much admired in both natural forests and landscapes. The rich brown heartwood of the walnut, especially black walnut, is an excellent material for making furniture, cabinets, floor boards, and paneling.

Food-wise, walnuts have been around for a long time. According to some sources, walnuts are the oldest known tree nut used as human food. This is based on archeological evidence from about 7,000 years ago. At one location in France walnuts were apparently being roasted, perhaps to make them easier to open. Seems like easier-to-open nuts would have been consumed long before that.
Walnuts have the usual good nutritional rap sheet typical of many tree nuts. In general nuts are heart healthy, lower blood pressure, and help manage cholesterol. Walnuts are no exception and are on the high end of the nut-benefit scale with a particularly good combination of fats and fatty acids. They are also a good source of copper, iron, zinc, vitamin C, and niacin (vitamin B3). Walnuts are comparatively high in calories though (it’s those fats and fatty acids) so don’t overdo it!

More of A Brief History: