A Great Madness Sweeps the Land

A Great Madness Sweeps the Land

Those who see the madness for what it is have only one escape: go to ground, fade from public view, become self-reliant and weather the coming storm in the nooks and crannies.

A great madness sweeps the land. There are no limits on extremes in greed, credulity, convictions, inequality, bombast, recklessness, fraud, corruption, arrogance, hubris, pride, over-reach, self-righteousness and confidence in the rightness of one’s opinions. Extremes only become more extreme even as the folly of previous extremes wearies rationality.

Imaginary sins are conjured out of thin air to convict the innocent while those guilty of the most egregious fraud and corruption are lauded as saviors.

The national mood is aggrieved and bitter. The luxuries of self-righteousness, indignation, entitlement and resentment have impoverished the national spirit. Bankrupted by these excesses, what little treasure remains is squandered on plots of petty revenge.

Blindness to the late hour is cheered as optimism, confidence in the false gods of technology is sanctified while doubters of the technocratic theocracy are crucified as irredeemable infidels.

Witch-hunts and show trials are the order of the day as those who cannot stomach the party line are obsessively purged, as healthy skepticism is condemned as a mortal sin by brittle true believers who secretly fear the failure of their cult.

Mired in a putrid sewer of suspected subversion and disloyalty to The One True Cause, heretics are everywhere to those caught up in the mass hysteria.

Completely un-tethered from cause and effect, those confident in the inevitability of a glorious future of unlimited expansion cling to past glory as proof of future glory, even as their hubris leads only to a treacherous path of decay and decline. As they stumble into the abyss, their final cries are of surprise that confidence alone is not enough.

Those who see the madness for what it is have only one escape: go to ground, fade from public view, become self-reliant and weather the coming storm in the nooks and crannies where cause and effect, skeptical inquiry, humility, prudence and thrift can still be nurtured. 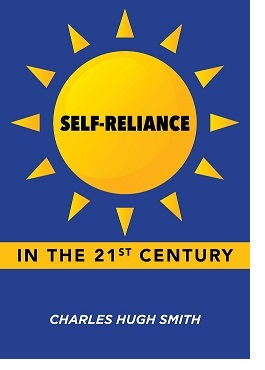 Read excerpts of all three chapters

Podcast with Richard Bonugli: Self Reliance in the 21st Century (43 min)

When You Can’t Go On: Burnout, Reckoning and Renewal $18 print, $8.95 Kindle ebook; audiobook Read the first section for free (PDF)

Will You Be Richer or Poorer?: Profit, Power, and AI in a Traumatized World
(Kindle $5, print $10, audiobook) Read the first section for free (PDF).

The Adventures of the Consulting Philosopher: The Disappearance of Drake (Novel) $4.95 Kindle, $10.95 print); read the first chapters for free (PDF)

My work does not fit into any ideological box; indeed, I view all ideologies as obsolete and misleading. I doubt this is a surprise to you if you’ve read the blog.

My lifelong avocations include bicycling, gardening, guitar, camping in the American West, cooking, carpentry and fitness, all of which are reflected in the blog.

I would re-write the bumper sticker “New York, London, Paris, Hilo” as “Shanghai, Kyoto, Bangkok, Paris, Hilo.” Many people wonder where I live; I split my time between the S.F. Bay Area and the Big Island, though I visit friends and family on Oahu as often as possible.

Our heritage is Scots-Irish (County Down), English and French; via marriage the family inlcudes Hispanic-American, African-American and Asian-American members. I think the word is polyglot.

Measured in terms of money I am not rich, but measured in friendships, health and output, I feel very wealthy indeed. I like my work and feel there is purpose in the blog’s independent critiques of the Status Quo and in the positive view I have of the next iteration of our economy and society.

I lead most of my life in the real world, and as a result my time online is extremely limited. This is why email to this site is read but may not be acknowledged. I regret the limitations but I receive thousands of emails a year and am only one 60-year old person with many other duties and tasks.

In my experience, good luck is rare; the default setting is rejection, disinterest and failure. I concur with Winston Churchill, who held that “Success consists of going from failure to failure without loss of enthusiasm.” That more or less sums up my biography.

This post was originally published on January 8, 2023 4:25 pm from Randy Rowe and can viewed here: https://newagora.ca/a-great-madness-sweeps-the-land/