Dionysian Divergence in An Apollonian World 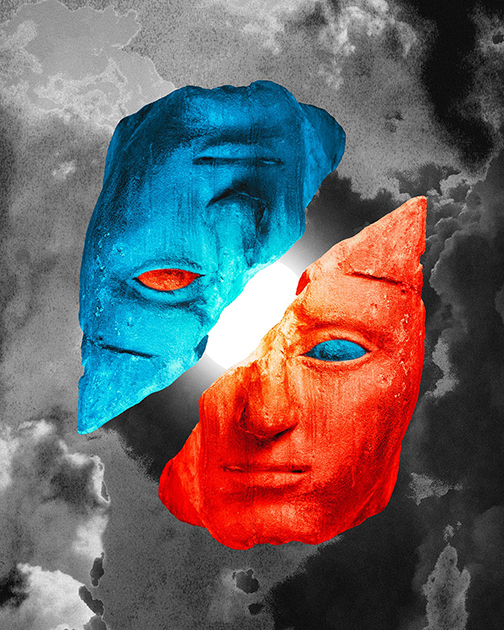 “These poor creatures have no idea how blighted and ghostly this so called ‘sanity’ of theirs sounds when the glowing life of a Dionysian reveler thunders past them.” ~Nietzsche

In a world overwhelmed with rigid bureaucracy, dogmatic reasoning, overreaching law and order, and brittle constructs of power, we need a force of nature that can bring about a harmonic balance. Lest we destroy ourselves and the world we live in, we must be able to puncture a hole in the ego of the Apollonian ideal. And the only force powerful enough to do that is more of a reciprocal than an opposite: the Dionysian dynamic.

Too much comfort, safety, and security handicaps creativity, expansion, and potential. Healthy expansion requires a little discomfort and insecurity. It requires a leap of courage into the unknown. It requires risk.

Although some things must be moderated more than others, extremism in anything is the bane of health. Even too much of a good thing can be unhealthy. We can breathe too much oxygen. We can drink too much water. We can even become too comfortable. There’s nothing wrong with comfort. But there is something wrong with too much comfort. Especially if we’ve grown comfortable living in a profoundly sick society.

The golden idol of Apollo:

“A mind all logic is like a knife all blade. It makes the hand bleed that uses it.” ~Rabindranath Tagore

As it stands, we are drowning in the Apollonian ideal. We are floundering and lost in rigid constructs of being. We are banging our heads against the slick and shiny steel walls of an unyielding maze. We are grinding our teeth at the daily grind. We are clinching our fists at being forced to be mere cogs in an unsustainable clockwork. We are too busy self-preserving and not busy enough co-creating new and healthier ways of being human in the world.

Meanwhile, culture tightens its grip. Its politics become hyper-partisan, thin-skinned, and entrenched. Its religions become radicalized, violent, and overreaching. Culture begins to eat itself. The people crushed between its jaws are bewildered and lost in aggrandized infrastructure and over the top bureaucracy. They become rigid, inflexible, fearful, and resort to self-preservation over self-improvement. They give in. They go numb. They succumb.

They’ve been overwhelmed by the Apollonian ideal.

There’s simply too much shiny order. Too much heavy logic. Too much flashy information and stopgap idolatry. Too much self-righteous sobriety. Too much reason that has forsaken imagination. It’s all a juggernaut of hyper-prudence, a dream state of illusions. It’s all a mighty Goliath and we’ve forgotten how to be David. The sun is so bright it’s blinding, and it has blinded us into a blind faith in the manmade order of things which has forsaken the true order of things.

The rise of Dionysus:

“As anywhere else in the world, the unwritten law defeated the written one.” ~Herman Hesse

Dionysian divergence is a primal awakening. It’s a sacred alignment with the Shadow aspect, which is projected like a blacklight into the too shiny world. It’s a drunken frenzy unleashed on a sober and stuck society. It’s a fierceness inflicted on a meek and mild goody-two-shoes culture. It’s a lion waking up from a nap surrounded by a herd of sheep pretending to be asleep.

Dionysian divergence is the dethroning of reason by imagination. Reason is important. But it will never be more important than imagination. For reason, like the Apollonian, has the tendency to fall in upon itself. Given too much rope, reason will hang itself by the hard-headedness and hard-heartedness of its own unwavering ideal. Reason will drown in its own reasoning. That is, unless imagination can gain the upper hand and pull it out of deep water.

Under the blinding sun of the Apollonian ideal, the Dionysian dynamic is a much-needed eclipse. It’s a beacon of darkness that gives us creative hope despite artless faith. It’s a primal upheaval, an animal frenzy of passion, frivolity, and lightheartedness in the face of over-domestication, apathy, and hardheartedness. It’s the liberation of instinct and insight. It’s the transformation of boundaries into horizons.

Dionysian divergence dances through the mannequin culture. It thunders past the status quo junkies. It flies high and above the steel walls of the Apollonian maze. It sees how Goliath has become an idol, a golden cow, a parasitic icon which has blinded the people of the world from the knowledge of their own courage.

Foremost, the Dionysian dynamic is a courage-enforcer, a mettle sharpener, a lion-awakener. Far too long has the culture lived a fear-based lifestyle under the steely gaze of the Apollonian Goliath. It’s time to cultivate a courage-based lifestyle. It’s time to plant seeds of honor. It’s time to balance the scales by poking holes in the overflowing cup of certainty, by melting down the golden pedestals of idolatry, by burning down our uppity high horses, by upsetting outdated apple carts, and by continuously un-washing the brainwash.

The balance of both(The Primordial Unity):

“Too much of the animal distorts the civilized man, too much civilization makes sick animals.” ~Jung

Blinding light can be just as unhealthy as too much darkness. To maintain balance, both must be checked by their opposite. The yin-yang of the Apollonian-Dionysian dynamic must be preserved. Ironically, this almost always means choosing self-overcoming over self-preservation.

This is because (like reason without imagination and the Apollonian without the Dionysian), self-preservation has the tendency to fall in on itself. Self-preservation becomes so busy with the small picture that it loses sight of the big picture. It becomes so entangled with its own self-seriousness and flashy ideals that it loses the ability to detach. And when you lose the ability to detach, you become trapped.

Where the Apollonian ideal is all about self-preservation in a comfort zone of order, reason, logic, sobriety, and prudence, the Dionysian dynamic is about self-overcoming and stretching the comfort zone by challenging it with risk, imagination, frenzy, ecstasy, and passion. The comfort zone is important, but it’s more important to stretch it.

This releases you from the trap. It propels you over yourself. You self-overcome. It reveals that “the way” was, and will always be, the ability to get out of your own way. Which also means getting out of the way of cultural conditioning, religious indoctrination, and political brainwashing. Detached from cultural conditioning, you’re able to see how everything is connected. You become a force of nature first, a person second. You are finally able to truly “observe.” More importantly, you become a spearhead for a new way of being human in the world.

The fusion of both the Apollonian and the Dionysian is the ideal way of being human in the world. It allows for the supercharged frenzied energy of the Dionysian to be applied constructively inside an Apollonian framework. Chaos pushing order to new heights; order taming chaos so it can lick its wounds. They push and pull on each other. Their sacred tug-of-war is a primordial dance that’s vital to the healthy evolution of our species. We forsake one for the other at our own great peril.

This article (Dionysian Divergence in An Apollonian World) was originally created and published by Self-inflicted Philosophy and is printed here under a Creative Commons license with attribution to Gary Z McGee and self-inflictedphilosophy.com. It may be re-posted freely with proper attribution, author bio, and this statement of copyright.

This post was originally published on July 30, 2022 3:42 am from Randy Rowe and can viewed here: https://newagora.ca/dionysian-divergence-in-an-apollonian-world/