Making The Best Cannabis Concentrates for a Global Market

Concentrates may have been first created on the west coast of the United States, but the global cannabis market at large is starting to awaken to the purity, tastes, and benefits of dabbing and concentrate consumption. Concentrates make up nearly 10 percent of total cannabis sales in the U.S. and since Canada legalized cannabis 2.0, sales of concentrates are steadily growing and are expected to surpass the current 2.9 percent market share to be in line with U.S. percentage sales within the next three years. Even South America is seeing the early concentrate entrants and it is only a matter of time before Europe and others develop legal frameworks for manufacturers to offer this significant sector of cannabis products.

Concentrate success is highly coordinated with the actual genetics of the cultivar. The reason is when concentrating the essential oils of the plant with many methods of extraction, the ratio of cannabinoids and terpenes is being retained. Traditionally, cannabis concentrates are made using dried and cured flower but over the last decade there has been a growing trend of using freshly harvested frozen cannabis to further preserve the highly volatile aromatic terpenes. No country has more tasty genetics than the U.S. for concentrates. Canada is advancing in the genetics race, the Netherlands is making a comeback, and Israel has been on the cutting edge. Europe at large still has a way to go in the legal markets for genetics and concentrates because most growers have two or three varietals at this stage and concentrates are not considered medical, despite having medical characteristics. 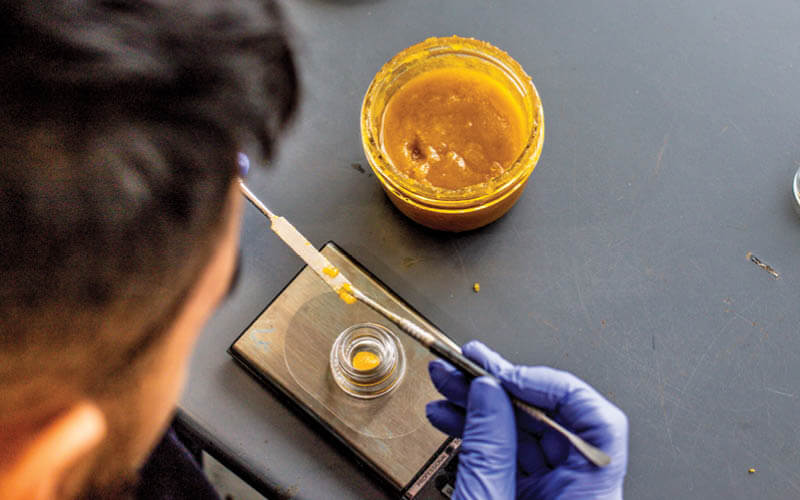 There are many different methods of extracting cannabis to produce a concentrate and even more subcategories of those concentrates. Generally, concentrates fall under these categories of extraction: ethanol, carbon dioxide, light hydrocarbon, and solventless. There are arguments to be made that any of these methods can produce the best concentrate, but it depends on your definition of the ‘best.’ The definition we are going to use is a concentrate that preserves the integrity of the cannabinoids and terpenes as presented by the plant during its flowering cycle, and that can be reproduced scientifically and methodically at a scale that can consistently service a global market.

With our term ‘best’ defined, we eliminate ethanol extraction and CO2 extraction for the solvents’ inability to preserve the terpenes. This leaves us with solventless extraction and light hydrocarbon extraction, both of which can make incredible concentrates that will make your mouth water. Looking deeper at our definition, however, we eliminate solventless extraction because there are difficulties scaling the methods beyond small-batch processing. This leaves us with light hydrocarbon extractions that typically utilize a combination of butane and propane.

Light hydrocarbons have been the bread and butter of both the illicit market and commercial extractors for many years. It is a method that provides the potential for high yields and great flavor. The basic principle is that gas is turned into a liquid, which is used as a solvent to separate the desirable compounds in your biomass from undesirable plant material like chlorophyll, waxes, and fats. Hydrocarbons are extremely volatile organic chemical compounds that contain only two types of atoms: hydrogen and carbon. The two most commonly used hydrocarbons in cannabis extraction are propane and n-butane.

When utilizing hydrocarbons, we must do so within a closed-loop system. This means whatever solvent enters into the system stays within the system and is unable to escape, and post-extraction the solvent is returned to a solvent tank, thereby completing the loop. New systems on the market are becoming much more sophisticated to match the growing demand for GMP facilities. These systems have data loggers that can track pressure, temperatures, run times, and have users logged in with unique identification so that any non-compliant runs can be tracked and users retrained. These systems also have leak detectors, so the operator does not need to have keen hearing or soapy water to address the potential increase of hydrocarbons detected on the lower flammability meter.

Propane and n-butane are single-bonded hydrocarbon molecules that are classified as alkanes. Because they are composed of only carbon and hydrogen, which have similar electronegativity values, n-butane and propane are known as non-polar alkanes, which means their electrical charge is distributed evenly across the molecule and not concentrated around two poles of positive and negative charges. It is this non-polar property of propane and N-butane that makes them ideal as cannabis extraction solvents. Cannabinoids and terpenes are also non-polar, which makes it easier for propane and n-butane to bond with them.

Propane and n-butane are both gaseous at room temperature and have ambient pressure but when placed under pressure at a reduced temperature they take the form of a liquid that can be used as a solvent for extraction. The liquid solvent is forced through the cannabis plant material where it bonds with the cannabinoids and terpenes.

The first step in making the best concentrate is to choose your biomass. It is important to visit the cultivation facility to see, smell, and feel the plants before committing to process the biomass. Once you have found the cultivars you want to extract, you should perform a fresh frozen harvest where you chop the stalk of the living plant, shuck the colas with sugar leaves from the stems, load the colas into freezer-safe airtight containers, and deep-freeze it at a minimum of -40°F (-40℃). The fresh-frozen material should be frozen for a minimum of 24 hours but less than six months to maintain freshness.

Each of these concentrate sub-categories could be considered the best depending on the biomass we began with. In most cases, the constituents of the oil from the biomass determine what the final product will look like. Different dominant terpenes may cause the THCa to be more or less solubilized, the color of the oil may not be perfectly pale, so whipping it will help balance that out, and sometimes the THCa will nucleate and create unavoidable crystallization.

There is a case to be made for the emerging global markets because the still-understudied entourage effect is most associated with well-made concentrates. Also, the purity and ability to control dosing are better than when smoking flower. In the next few years, you will see concentrates emerge in new markets as they mature. There is a place for concentrates in all the emerging recreational and medical markets throughout the world.