The art of fermentation is addictive; there’s no doubt about it. It began with the simplicity of beetroot kvass in my house, followed by some sauerkraut and a few fruity and boozy experiments. So what I came across last summer was surprising and a bit strange to understand at first – a lot of my fellow Poles seemed to be well into making their own vinegar, yet the fermenting groups in the UK were not mentioning it all.

When I think of vinegar, I think of fish and chips. The British obsession with malt vinegar over chips, salt and vinegar crisps, and balsamic glaze were about the only reference I could make. And yet, the witches on the continent were showing off their colorful bottles, praising the health benefits and admiring the plethora of flavors. I just had to try it, even if I never intended to use them. Fast forward four months, and I find myself with 26 different kinds of vinegar and only the snow and frost holding me back from madly bottling more. 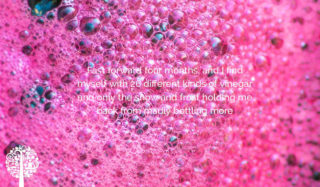 The Process And History

Since the topic of Lacto-fermentation has been covered in the previous issue, we can compare its process and benefits to the art of vinegar making, also known as acetic fermentation. In short, it is a process in which alcohol is converted into acetic acid thanks to a bacteria group called Acetobacter, more particularly, A.aceti. That’s the same bacteria that will turn wine into vinegar; in fact, the meaning of the word vinegar is sour wine.

Traces of vinegar were found in Egyptian urns, but the oldest records of vinegar use go as far back as the Babylonians, circa 3,000 BC. As with Lacto, the official data on the specific type of bacteria – the acetic acid bacteria – was discovered by biology hero Louis Pasteur, a French microbiologist who studied lactic acid bacteria with Elie Metchnikoff.

Googling the benefits of vinegar is guaranteed to take a day out of your life. The low pH of the solution seems to be lethal to a lot of nasty bacteria, be it in our gut, on our skin, or surfaces around the house. There are many varieties of vinegar with different medicinal properties and uses. The most famous (or hipster, if you ask my husband) of all kinds of vinegar, apple cider vinegar, has been lately hailed as the ideal product to aid indigestion and support the digestive tract. It stimulates the stomach juices, synthesizes digestive enzymes, and helps break down fats. In popular literature, it has been advertised as having weight loss properties. It stabilizes the stomach acid and helps in getting rid of heartburn. Historically, Cleopatra was known to drink a glass of water with vinegar after each feast, which was said to contribute to her having the perfect figure. 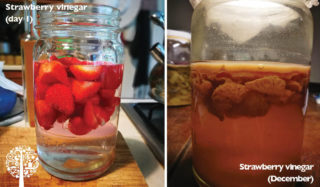 Vinegar is also highly cooling and has antiseptic properties. When spread on the skin, it evaporates quickly and offers a soothing effect, making it an excellent first aid for mild burns, including sunburn. It’s used as a skin tonic and a hair wash thanks to its low pH, which repairs damaged hair structures, making it shinier and preventing it from falling out. I have even read that it will help get rid of fever in babies when used as a delicate body wash or a head compress.

Household and Culinary Use

In the house, vinegar can unblock the drains, clean surfaces, bathrooms, and bring perfect shine to windows. Bacteria and pathogens stand no chance against it, so it’s worth trying it out. The list of benefits seems never-ending!

And then, of course, there’s vinegar’s ubiquity in the kitchen. Vinegar is used in salad dressings, meat and fish marinades, as an additive in soups and sauces, or in teas or soft drinks – also known as lemonades.

Making vinegar is an easy process requiring about ten minutes of work and a lot of time to do its magic. You only need water, sugar and organic matter as the base. For every liter of water, add four tablespoons of sugar (for vinegar-based on herbs, maybe even five tablespoons, as their sugar content is lower than fruits or veg).

Every plant has its unique medicinal properties, and when made into vinegar, these stand out even more. Choose your fruit or veg, chop it finely to speed the process up, stuff the jar to a third of its height, and cover with the sugary solution up to the top. Leave about 5cm of space for the vinegar to ‘work’. Cover with a clean cloth or a double layer of paper towel and secure tightly with a rubber band. 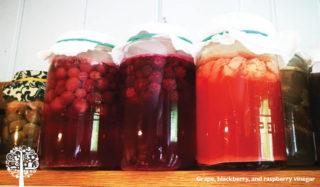 To Stir, Or Not To Stir?

At this point, there are two schools of thought – one suggests that the vinegar has to be stirred every day for 30 days; the other says to leave the vinegar alone to do its work in peace. You will get a cloudy vinegar with mixing, but it’s less likely to go moldy. Without stirring, you will get clear vinegar, but some mold can spoil the process if you’re not careful.

I found a perfect mix; don’t stir it; gently submerge the contents under the brine until you start seeing a gelatinous layer forming on top of the contents. It’s called a “Mother” and signifies your vinegar beginning to work. The Mother will create a layer to the shape of your vessel and protect the anaerobic environment below. Vinegar formation is anaerobic, so many are against stirring it and causing oxygen to interact with the fruit. 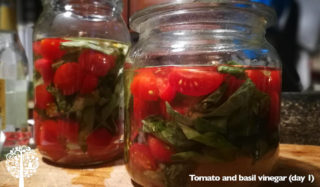 Two tricks will help with Mother formation on your new vinegar. First, you can add a splash of shop-bought (or homemade) apple vinegar on top of your contents, or if you or your friends made vinegar before and have a spare Mother handy, then you can add it at the top of your new jar. Both methods will speed up Mother formation on your vinegar, and dunking it daily won’t be necessary.

Now, the great wait starts. Your vinegar will need to stay at room temperature for at least three months, and be warned; it will smell a bit funky as the alcoholic fermentation takes charge. After some time, the smell becomes more vinegary and pleasant. Often, the contents will fall to the bottom; this is a sign that your vinegar is ready to be poured into a clean bottle and left in the cellar or a cool spot for at least six months, or even better, a year. All vinegar will mature with time, and like wine, the longer they rest, the better they are. 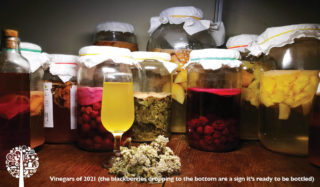 Two products deserve special mention for vinegar – oxymel and mustard. Oxymel is a one-to-one mix of apple vinegar (often steeped with fruits or made with fruits to start with) and honey. Its medicinal benefits are incredible in strengthening the immune system and fighting infections. After you’ve bottled your liquid vinegar, you can combine the apple (or raspberry, blackberry, etc.) pulp left behind with mustard seeds, honey, salt, and turmeric, creating beautiful homemade mustard in just six weeks. 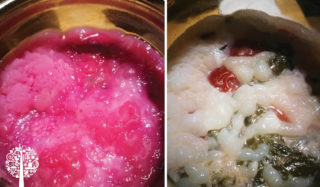 Making vinegar is fascinating, and judging how the Lacto-fermentation trend has skyrocketed in the western world, vinegar is next in line.