People not plants are the problem: The seven most common mistakes of 2022

This post is presented by our media partner Grow Opportunity
View the full article here.

Let me begin by saying that cannabis plants do not lie about their health status or performance, it is the human caregivers who often cannot interpret their language or read their distress signals.

Eventually AI will be equipped to translate those signals so that we may act accordingly, but until then, we should train ourselves to read the plants and take corrective action sooner rather than later.

The integral reactions that occur through respiration, highly dependent upon day and nighttime temperatures, may be misinterpreted and cause hinderances to the plants’ metabolism and energy creation, slowing their developmental processes.

That is to say that the respiration equation must be understood and all inputs planned accordingly. Any deficiency of raw materials can derail the entire manufacturing process.

For example, elemental molybdenum is an important mineral required in small quantities for nitrogen assimilation. Any one of the plants’ needs, if not properly met, becomes a limiting factor for growth and development as well as bud yield and quality.

These are the most common mistakes I encountered in 2022:

CO2 is the first raw material required, however plants have been growing for centuries outside without the addition of CO2, so why it should matter now? With indoor growing, plants display light coloured leaves and lower yields to express this lack. In one case, the grower was attempting to remedy lower yields and when I looked at the CO2 data, the levels were lower than ambient. In another case, the grower was using CO2 during the dark period as well, causing crop damage. 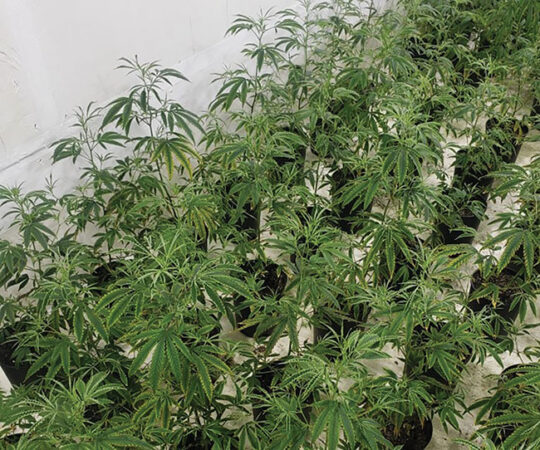 Over the entire life cycle of the crop, one grower was so fearful of root rot that not enough water was supplied to the plants. There were tell-tale signs of dehydration, such as dark, thick leaves, persistent wilted plants, and overall reduced yields. THC levels were very good, 28 per cent with a fine terpene profile, but consistently low yields reduces company sustainability.

In hydroponic growing systems where plants were fertigated using only water with dissolved nutrients, plants displayed several problems. They had soft, thin stems and slow vegetative growth. The growers were afraid of using higher electrical conductivity (EC) values to create modest water stress on the plants.

While there are different light recipes for indoor and greenhouse cultivation, the general agreement is that light levels between 400 to 700 micromoles/m2/second are optimal, but occasionally growers use over 1000 micromoles. Some research indicates that cannabis plants can tolerate high light levels, but it must be accompanied by adequate water and nutrient management. Problems occur when growers adopt research findings about the use of elevated light intensity to increase production and yield but do not match the nutrient and water input levels.

The practice of high day and nighttime temperatures combined with low relative humidity exposes the plants to high vapor pressure deficits. This increases environmental stress on the plants, and the energy that should be used for flower growth and volatile oil production is now being utilized for evapotranspiration.

Observed nutritional problems were generally attributed to a lack of understanding about the importance of pH in the root zone. Some growers created perfect nutrient solutions but did not realize that the uptake of nutrients depends on the pH, which must be monitored daily and adjusted up or down depending on plant conditions.

Dr. Mohyuddin Mirza, PhD, is an industry consultant in Edmonton, Alta. He can be reached at drmirzaconsultants@gmail.com.