The maxim, ‘Know thyself’ is as relevant now as it’s always been. We live in an era when the would-be-controllers of our realm bombard the masses with the spurious notion that we are entirely subject to their whims, plans and diktats. The oft-heard refrain, It’s for your own good is, of course, the mantra of tyranny.

Such an attitude is anathema to anyone who is capable of critical thinking and knows himself to be sovereign, answerable only to the creator of all that is and will be.

When one is lost, one will naturally seek direction. For the vast majority of people, whether they be Non-Playing-Characters (NPC) or neurologically compromised, the fake authorities are taken to be the ultimate source of knowledge and wisdom. This is the essence of what passes for our reality on earth.

Thus, a populace that is led, like lambs to the slaughter, is lost in a whirled of lies and omissions.

Few are the ones who can take out their own inner compass and locate themselves correctly in time and space.

Right now, and I state this without any hint of exaggeration, the finest and, perhaps, ultimate example of such an individual is Jason Breshears of Archaix. 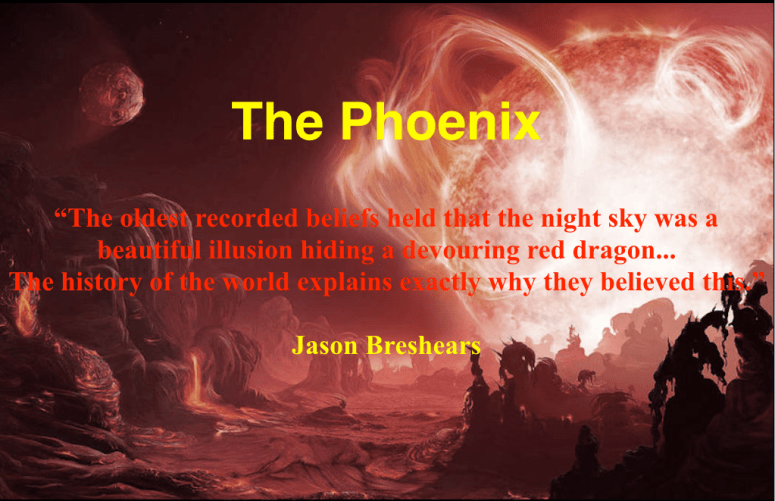 What Jason has achieved is beyond anything I have ever seen: the sheer expanse of his work is of such profound import that this article can only hint at it. In fact, it is best to let him show you precisely what he has uncovered after 26 years of chronicling over 1300 old historical texts into what he calls his Chronicon: an emphatic timeline that utilises all the world’s calendars to produce a verifiably correct model of time. The fact that the ancient ones went to such great lengths to record the passage of events via such sophisticated time pieces like Stonehenge, Newgrange and the Great Pyramid at Giza cannot be denied.

The question is what were they recording and why was it so important?

Jason Breshears’ answer to the question is that they were recording the mathematical precision by which events occur throughout history. His discovery of the 138 year Phoenix event being a case in point, probably the most significant of all. In any event, the Phoenix was regarded by the ancients as the Keeper of the Calendar:

Jason’s prodigious work goes back as far as the ancient sources – old history books, manuscripts, stone etchings, hieroglyphics and ancient architecture (more on this below) etc – to the year 5239 BC (see Chronological Chart 5239BCE – 2046 CE above)

Once one understands how the ancient accounts fit accurately into his Chronicon, then one can begin to see just how vast and rich our hidden history is. That richness applies as much, if not more so, to the islands of Britain and its ancient history as anywhere. An ancient history that the establishment has sought to bury down the millennia and one which I will be dipping into in Part Two of this introduction to the Phoenix phenomenon.

As I stated previously, this article can only provide a whiff, the merest of scents, of the broad and deep expanse of Jason’s work. In fact, it humbles me to even attempt such an undertaking. 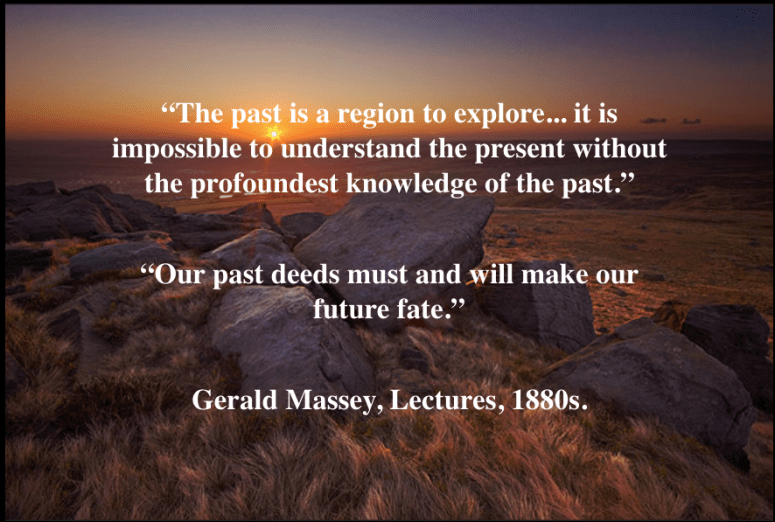 North America – the ancient place of origin of the Anunna?

I have over the last few years been becoming increasingly aware of the anomalies surrounding the falsification of the timelines of history concerning the magnificent architectural structures that exist(ed) all over the world and which point to vastly superior technologies being available to previous populations. The official narrative requires us to accept the notion that many such buildings like the superb town hall of Rochdale (to name but one random example from many) were constructed by a workforce whose only available technologies were hand tools and the horse and cart and within timeframes that collapse under scrutiny.

A more realistic view is that these buildings are in fact much older and are the dug-out remnants from a time when a catastrophe of immense magnitude wiped out the populations and with it the collective memory of those times. A reset, in other words.

Jason has identified the Phoenix Event as being the prime example of a reset – one that was meticulously recorded by our ancient seers and ancestors. Such was its impact, the people had to know about its return. It was the stuff of folk narratives, songs and factual record. Here, he refers to it as a weapon,

…in 3895 BCE the Phoenix Weapon reappeared. The civilisation of the Anunna was caught off guard, the majority were lost. Cities disappeared in a rain of mud that buried whole continents … Anunna population decimated again in massive quakes and a simulated poleshift, continental destructions volcanism, Commemorated later as the Fall of Man.

To re-focus on the lands of North America. There is a plethora of archeological and material evidence of vast megalithic constructions that have been buried under a cataclysmic fall-out that wiped out an ancient civilisation in North America, causing its ‘Anunna’ population to leave those lands and migrate East:

Unknown to the Matriarchy peoples of Asia, Africa and Europe, across the vast oceans, the descendants of the Anunna had built a vast civilisation in a very different North America

The Anunna were this time prepared for Simulacrum resets – technology, historical records and manufacturing intact, they had constructed fleets of arks and built underground survival facilities

In this 456th year of PreFlood antiquity, the American continents were devastated by cataclysm.

Many of the Anunna did not escape … cities, bunker facilities and arks were lost […]

The Americas were deemed unliveable and the remaining arks navigated to predetermined destinations in the Old Worlds of Asia, African and Europe.”

“Some Anunna remained in the Americas, others landed in the British Isles and built a fantastic civilisation, others settled the paradise-like lush freshwater valleys of the Mediterranean and Black Sea regions before they were seas…

but the most prominent Anunna group landed their fleet at Dilmun and then entered the historical record as the Anunnaki of Sumer, venerated by the Black-Headed People [Sumerian self-designation] who received them

The Old World traditions of Bearded Gods was given credence with the appearance of the Anunna.” Jason Breshears. 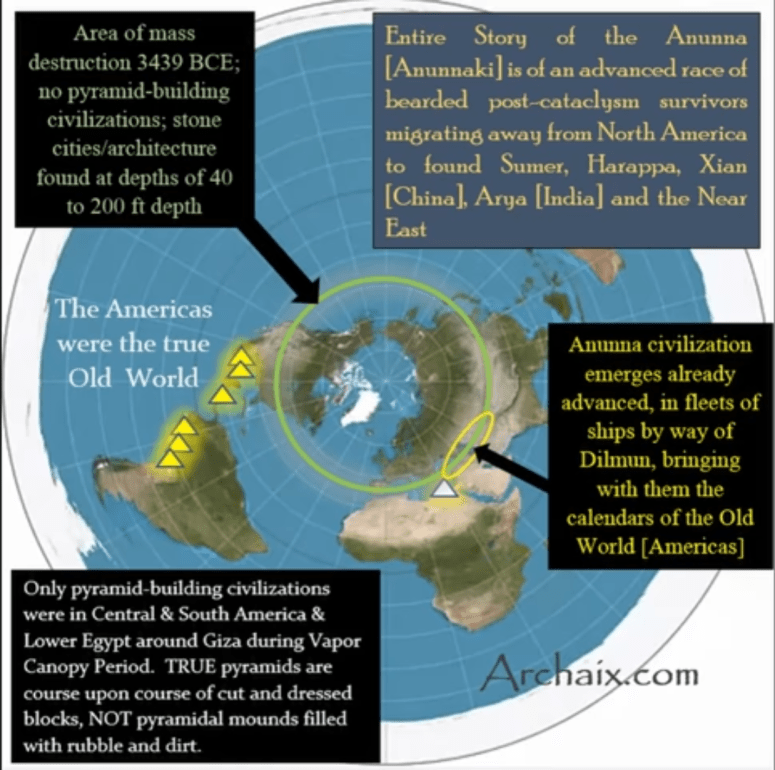 With regard to the Anunna peoples’ origins being a devastated North America, from whence they migrated East, what is being presented here is a history of catastrophes that were so immense in their impact that the populations of the Anunna dispersed far and wide (and were known as the blue eyed bearded ones, as mentioned so widely in all manner of ancient records, from Japan to India to Sumeria to Egypt to Greece and South America) migrated East then, after many a long sojourn, Westwards to the Middle East, some back to the British Isles and, in the form of the later conquistadors, to South America; a place where their return was anticipated. The ancestors of those ancients then began to return to the land mass known as North America to build it on the solid foundations of Natural Law and Liberty.

For the purposes of this introductory piece, these sea-faring peoples brought with them, after they had been forced to leave their decimated, buried homelands in North America, advanced technologies that were introduced to the “Black Headed People” and gave them the view that they were Gods. The richness of this history is so wonderful, the more I realise it, the more I see what a crock of shite I was fed at school and beyond.

To be continued in Phoenix Rising (Part 2): High British Antiquity.

All of Jason’s work can be found at www.archaix.com

His You Tube channel is ARCHAIX

This post was originally published on August 31, 2022 3:00 am from Randy Rowe and can viewed here: https://newagora.ca/phoenix-rising-part-1/