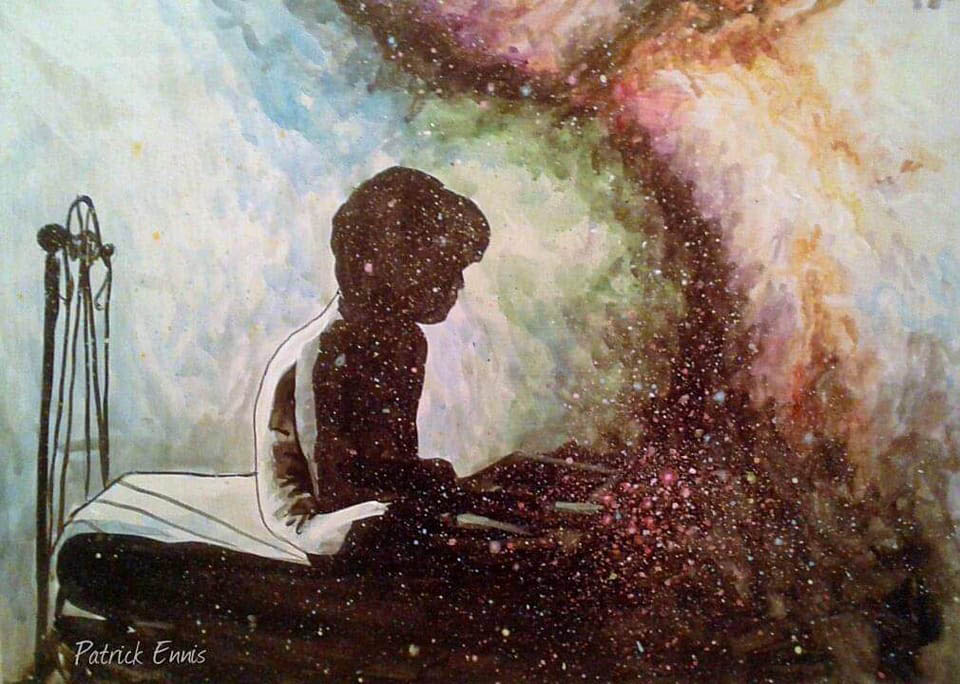 To be birthing something vital at a time of extreme fragmentation and dissolution is a statement of defiance. Defiance of the tapestry of fear which hangs over those unwilling to question the direction of travel they are being ordered to adhere to. Ordered by the soulless cabal presently controlling almost all the arteries of this material world.

So it is that The New Now steps boldly forward to throw light on the true nature of the simian darkness through which we struggle to hold our true course, and whose demonic undercurrent reveals it as a desperate attempt to hold-down the lid on humanity’s rising levels of spiritual awareness.

Largely missing from conversations concerning what tactics to deploy against this anti-life cabal and its infamous ‘lockdowns’ on vast numbers of essentially good, peace loving and healthy people – is the possibility of raising our energetic powers in direct counterpoint to the low vibrational state made manifest by Luciferian forces of darkness.

Up until now many ‘meditators’ have expressed the belief that to take direct action against an outside force – to directly confront the source of a problem – is contrary to the spiritual ethos of inner concentration on the Divine.  In other words, blocking out the troubles of the world by entering into a state of inverted consciousness.

However, the vital work of raising one’s spiritual awareness is only one half of the task we need to undertake, without the other half it becomes an escape rather than a vehicle of intent to bring about change.

What is this other half?

To be ‘whole’ we must also embrace the outwardly directed practice of giving service to humanity.  Service of this nature includes confronting the despotic power-pushers severing our basic civil liberties/human rights and making humans into slaves of the state hierarchy. To take action against  this anti-life cabal is the outgoing part of the equation – the outward breath as it were – whose complementary with the inward contemplative breath is entirely organic and natural.

A true spiritual exponent will embrace both inward and outward actions, recognizing them to be two dynamic parts of one whole – just like breath itself! Neither inward, on its own, or outward, on its own – will ever change life for the better. On the contrary, it will guarantee more destruction.

Grasping this, we can then apply it to the inherent need to be an ‘inward seeker’ and an ‘outward actor’ – both.  And this has been the mistake made in the past; it has been assumed by many that you can’t be both meditator and activist, and certain groups have used this as an excuse to hide themselves away from taking active responsibility for the health and welfare of Planet Earth. Some activists equally have used it as an excuse to shun the development of spiritual disciplines

But today we have arrived at a fresh dynamic: The New Now is “Wholeness.”

The New Now obliterates the false divisions created within individuals and societies and reveals the oneness of all apparent opposites. Oneness is a Divine state.  It embraces the necessity of outward fight as equal to the necessity of inward reflection. It reveals them to be One force.

All life is expressed through movement. When fully immersed in ‘Now’ one is aligned with the vibrational essence of the Universe, and providing one is open to its deep mystery, will experience a subtle state of tingling ecstasy.

That state is something all of us have within our reach, but it is illusive and cannot be tricked into existence. Ecstasy comes about as the result of friction between two complementary opposites i.e. Yin and Yang -creating a third state.  Just as a man and a woman create a baby as a blissful expression of Divine Spirit incarnated in a human body.  An expression of innocence, full of wonderment about this new world he/she has just arrived in. This is the rudimentary form of ecstasy.

To be alive in a world in which the expression of supreme joy is recognized and encouraged, is to experience genuine freedom.  That’s where we want to be.

But we do not live in such a world. For us freedom will not come about without a great struggle. If we want ‘peace’ to be manifest on planet Earth we have to rise-up physically, mentally and spiritually – against the forces that are blocking such peace from manifesting. How else can we win this battle?

Now that we recognize the existence of anti-life forces explicitly attempting to anesthetize the rising consciousness of mankind, we are called upon to channel our energies into actions that will prevent such a situation from coming to pass.

Here is a direct – and unavoidable – clash between a dark agenda and the manifestation of light. One in which the light gains strength precisely because of the directness of its challenge to the darkness.

To help it do so, we need to raise our level of determination to overcoming the planet’s despots low vibrational trail of destruction. We are, in effect, specifically being called upon to raise our capacity for self empowerment and leadership within the context of a direct attack on the very foundations of human existence. As the saying goes “When injustice becomes law resistance becomes duty”.

At a time like the present, with a fascist dictatorship establishing itself right under our noses, injustice has become law – and resistance does more than become duty, it becomes critical to our very survival.

Here lies the key.  We know that higher vibrational energy fields exist in dimensions beyond our third density ‘five senses’ experiences. Many of us have witnessed glimpses of fourth dimensional existence and beyond. Now, with the main oppressors of mankind at our door, armed with every conceivable form of divisive weapon, it would seem like we are overwhelmed, lacking any significant means to fight back. But how wrong we are!

Amazingly, we are in possession of a weapon far exceeding the power of our oppressor’s physical and mental armoury. All we have to do is activate it – and maintain its momentum in all confrontations with forces intent upon cowing us into submission.

We need to be moved to take action by a deep sense of emotional outrage “I will, so long as I’m alive on this planet, never give-in to the anti-life thieves of all the beauty and bounty we have been gifted with on this priceless world.”

Our ‘weapon’ is a gift bestowed upon us by Divine decree. A gift so great in its potential exigence, that, once activated, no dark force can come near. In fact the very act of invasion presently manifesting itself on this planet, creates a powerful stimulus for our secret weapon to be activated and to sweep clean the satanic energy fueling the poisoned ambitions of our would be destroyers.

‘The embracing of wholeness’ is a vital imperative in this struggle. It behooves us to rise beyond imposed divisions – such as those of ‘activist’ versus ‘spiritualist’ – and to reconnect the two into the One they actually are. In this example, the actor and the meditator fuse into ‘the spiritual warrior’, on a crucial mission to bring balance into a world torn by division.

The birthing of ‘The New Now’ is a celebration of a higher threshold of individual and collective consciousness.  A state that translates directly into a vast array of actions for the emancipation of an endangered humanity.

Readers will instantly recognize this call because it is nothing less than the direct response of our very own divine spark to the imminent survival threat being imposed upon it.

Our rising power quite simply affirms this unstoppable force of transformation – and its extraordinary ability to turn everything completely around.

This post was originally published on December 1, 2022 5:18 pm from Randy Rowe and can viewed here: https://newagora.ca/spirit-rising-call-to-action-by-julian-rose/