The Future of Food: Crickets! By Rosanne Lindsay

The current and predicted food shortages are planned, by design, under The United Nations Sustainability Agenda.  If you’re just hearing about it now, you missed the warnings of food shortages that came earlier, recommending a diet of insects.

In 2013, the U.N. released a report titled, Edible Insects: Future Prospects for Food and Feed Security. The report fueled a campaign to “stabilize the global food supply.” If the Chinese can eat insects, then so can everyone else, right?

What about meat lovers pizzas? What about steak dinners, and bacon bits? 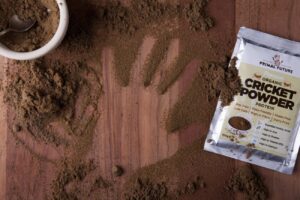 Beyond war there is the ‘Beyond Burger.’™

After decades of government subsidies for chemical applications to crops for feedlot animals, and vaccines for diseased animals, world leaders are telling people that they must now stop eating conventional beef and animal protein and they must do it for the environment. Everyone must fall in line with the U.N. Sustainability protocol.

Back in 2019, the media warned people that Beyond Burgers made of hemp, pea protein, and crickets were just around the corner. A 2019 article in Bloomberg news on Beyond Meat:

Crickets are the main insect making it’s way into recipes, with the ground-up bugs having little taste. The powder is a filling option and contains “far more protein than wheat flour,” which is not saying much. It is being added to foods like sausages, cookies, muffins, tofu and ice cream. Last year, Loblaw Cos., Canada’s largest grocer, even added cricket powder to its line of President’s Choice products. 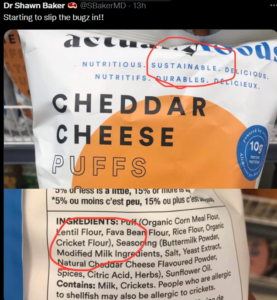 Today, it is more important than ever to read labels if you want to know what form of protein you are ingesting. On the new sustainable Cheese Puffs, right next to organic cornmeal flour is listed organic cricket flour.

According to a decade of media hype, crickets will save the planet using sustainable insect-based technologies. What type of technology is that? Did someone say feedlots?

We cannot solve our problems with the same thinking we used when we created them.– Albert Einstein

What about protein? The Chinese eat crickets for protein, right?

According to one study published in the journal PLOS ONE, raising crickets on various diets produced disappointing results, and not a lot of protein.

Researchers raised crickets on one of five different diets: corn, soy, grain, food waste, and crop residue. Those crickets fed processed food waste had protein conversion rates (35%) similar to chickens. Nearly all those fed straight food waste died before they could be harvested.

In summary, the same technologies that created diseased feedlot animals are back, with crickets.

The road paved with crickets is filled with lies, from global war to global warming.

Climate Change legislation called “Global Warming Solutions” in California is tied directly to international influences of U.N. Agendas 21 and 2030 for Sustainable Development. Yet, impacts from the government’s cloud seeding and geo-engineering programs continue unabated and suppressed from people who make decisions about their food.

The U.N. narrative suggests that eating less meat is essential to curb Climate Change. However, the fact that the climate changes every day appears to have little to do with eating meat or anything else, for that matter. Choosing to eat meat should be based on the quality of the meat, how the animal was raised, what it ate during its life, and whether it was healthy and happy.

The Climate Change deception is alive and well as long as you believe it. Yet, doing away with the abusive industry of feedlot animals may not be a bad thing if humanity wants to improve the quality of life for all. After all, it is not only what you eat, but the energy of what you eat, that matters.

Even if you go along with the Climate Change modifications, can you digest crickets?

The exoskeleton of insects contains chitin. When you eat insects you eat chitin, which cannot be processed by the human body. So if you’re eating insect burgers, then you are going to make yourself sick.

According to a 2009 medical journal, World J Gastroenterol, chitinase causes inflammation that leads to health problems, from asthma to tumors (glioblastoma), and changes in epithelial cells:

CHI3L1 may be highly involved in the chronic engagement of inflammation which potentiates development of epithelial tumorigenesis presumably by activating the mitogen-activated protein kinase and the protein kinase B signaling pathways. Anti-CHI3L1 antibodies or pan-chitinase inhibitors may have the potential to suppress CHI3L1-mediated chronic inflammation and the subsequent carcinogenic change in epithelial cells.

According to a 2019 article in PLoS ONE, parasites were found in livestock of 81% of insect farms, where 30-35% of these parasites are pathogenic to humans.

Edible insects are an underestimated reservoir of human and animal parasites. Our research indicates the important role of these insects in the epidemiology of parasites pathogenic to vertebrates. 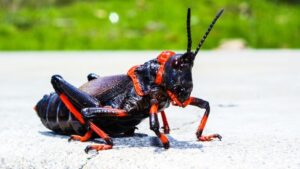 Perhaps a whole new industry of cricket enzymes to help you digest your dinner, and anti-parasitics, to keep you alive, is just around the corner. In the meantime…

What happens when farming becomes centralized on a global scale?

What happens when fewer people are growing their own food?

What happens when flour, burgers, pasta, and fillers, and all foods are tied to Climate Change?

What happens when you ask your government officials for proof that crickets will save the world?

What should you avoid like the plague that it is?

This post was originally published on August 22, 2022 3:00 pm from Randy Rowe and can viewed here: https://newagora.ca/the-future-of-food-crickets-by-rosanne-lindsay/