The move comes following a motion before Vancouver City Council on July 19.

The change followed a previous move by council in October, 2021 to lower it from $33,958. The most reduction was part of a host of changes in the fees the city collects under the Licence By-law, Vehicles for Hire By-law and Animal Control By-law.

The vote in support of the motion was unanimous.

Despite the most recent reduction, city staff’s report notes that cannabis retailers in Vancouver still pay significantly higher fees when compared to other cities in B.C. and other retail licence types within the city. 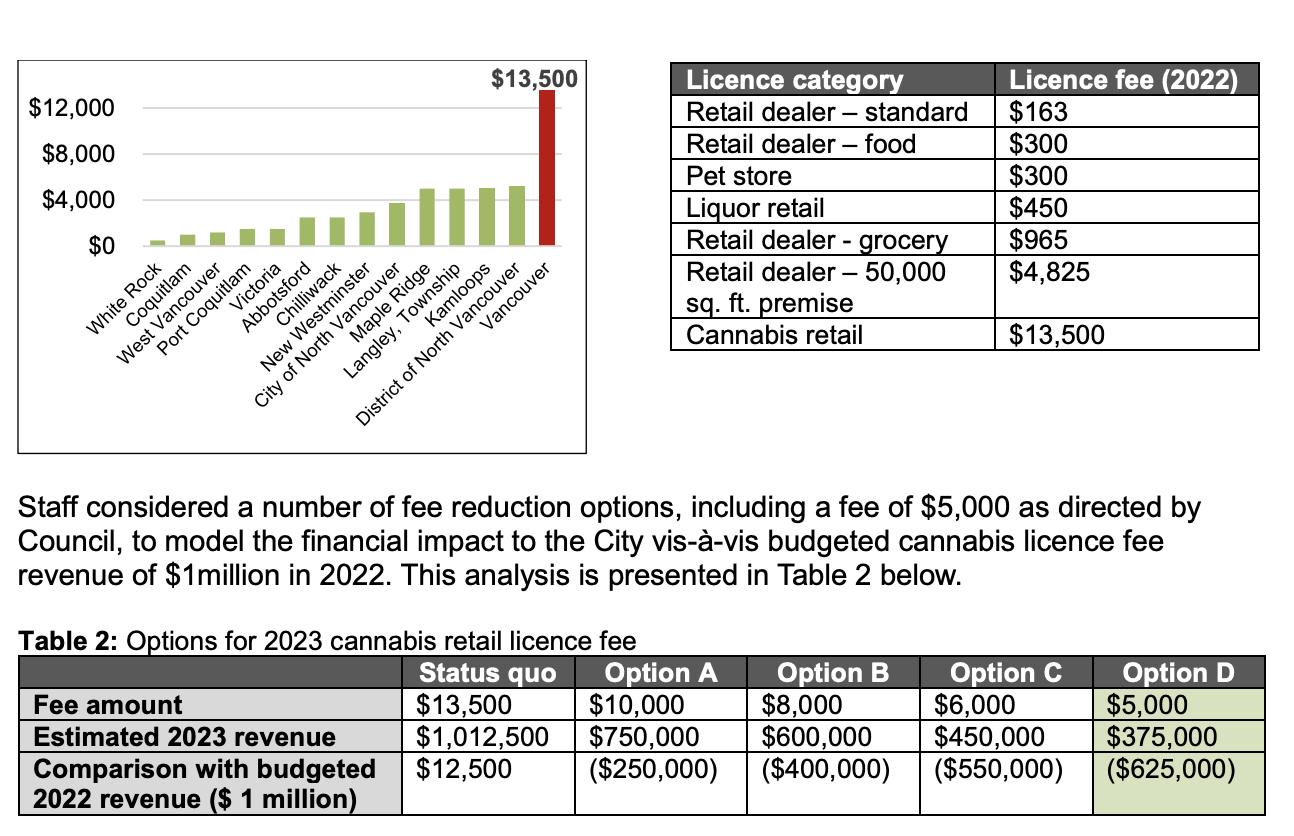 In comparison, the liquor retail store fee in Vancouver is only $429 and the maximum fee for a standard hours liquor establishment is $3,219. The next highest retail dealer fee is $4,595 for a 50,000 sq ft premises; a Class-2 Casino licence fee and the licence fee for a Horse Racing Exhibition are both $13,464; the Pacific National Exhibition annual licence fee is $18,856, and the maximum fee for an extended hours liquor establishment is $23,525.

Although the city will lose revenue from these reduced fees from cannabis stores (a projected shortfall of $625,000), the expectation from city staff is that this will be covered by increases in other fees such as dog licensing and IMBL ride-hailing licences.

Ehren Richardson, the Director of Sunrise Cannabis, located on Kingsway in Vancouver, shared with council that such changes are needed to help the many struggling cannabis retailers in the city service, especially independent stores such as Sunrise.

“Lowering this business licence fee will likely save some mom and pop shops from going bankrupt and we need them to survive so that we can make a case for change in provincial cannabis policy,” said Richardson.

Jaclynn Pehota of the Retail Cannabis Association of British Columbia (formerly ACCRES), also spoke, representing 14 different retail “bands” in the city. She said the change would represent a “significant relief for our sector which is continuing to struggle with a number of different challenges.”

Oana Capilano of Eggs Canna, with two locations in Metro Vancouver, also spoke to the council in support, saying it was a “much needed lifeline”.