Why Are My Leaves Turning Yellow? 3 Common Nutrient Deficiencies

I spent several years managing a hydroponics store in Michigan, and I can’t tell you how many times a customer would come in and say, “My plant’s leaves are turning yellow. What’s wrong?” I’d usually stop and take a deep breath, because I knew I was going to have to put my detective hat on!

Yellowing leaves can be caused by just about anything that’s a little out of whack in a growroom: low light, overwatering, nutrient deficiencies, nutrient toxicities, root diseases, viruses…or it could just be a symptom of the plant’s natural aging process. Who knows? But when it came down to nutrient deficiencies, I could usually narrow it down to one of three things: magnesium, nitrogen, or iron deficiency.

My first question was always, “Where did the yellowing leaves start to appear, on the bottom of the plant or the top of the plant?”

I’d ask a few more questions, just to narrow things down a little, such as: “Are you growing in soil or hydroponics? What is your pH? What is your EC? What stage of growth are your plants in?” Eventually, I’d make an educated guess and hope I was on the right track.

If you’re growing in hydroponics and you start to see signs of yellowing leaves, don’t panic. Check your pH, check your EC and change out the water with fresh nutrients on a regular basis. Most of the time, the plant will fix itself! But get to know your plants. 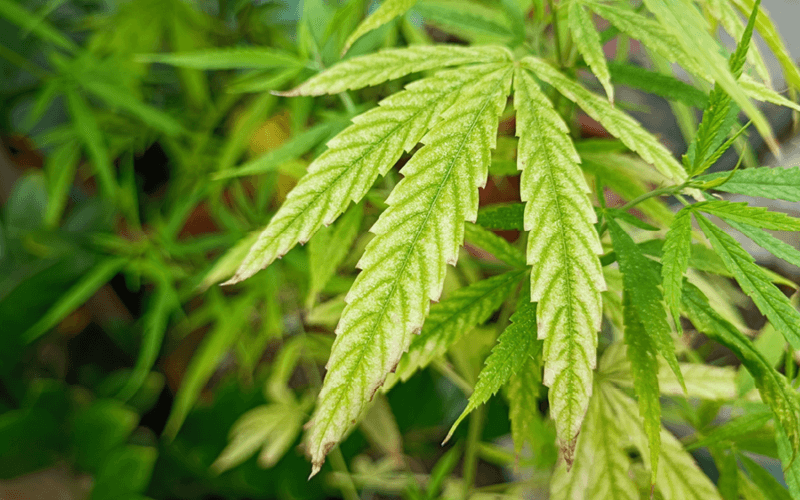 If a magnesium deficiency starts to develop, the plant will pull magnesium out of the lower leaves.

Since magnesium is the central element in chlorophyll, the bottom leaves develop interveinal chlorosis—the veins would remain green, but the tissue between the veins would begin to turn yellow.

Plants need plenty of magnesium when their energy requirements are highest, so during times of rapid vegetative growth or heavy fruit production, sometimes plants can’t keep up with demand for magnesium. In this case, adding a little cal-mag to the reservoir, or spraying a little magnesium sulfate on the leaves will green up the plants in a hurry.

During times of rapid vegetative growth, transition periods between grow and bloom, or during heavy fruiting and flowering, giving your plants a dose of extra magnesium could be rewarding.

Sometimes there is plenty of magnesium in the reservoir, but the plants still show signs of a deficiency. In that case, too much potassium may be the problem—a potassium toxicity shows up as a magnesium deficiency. That’s why I ask what stage of growth the plant is in. If it’s in the fruiting and flowering stage and the grower is adding lots of P/K boost, a magnesium deficiency might develop. In that case, I’d recommend backing off a little on the extra potassium. Otherwise, you are only treating the symptoms and you could actually cause more problems by using too many additives. When it comes to plant nutrition, it’s all about balance. 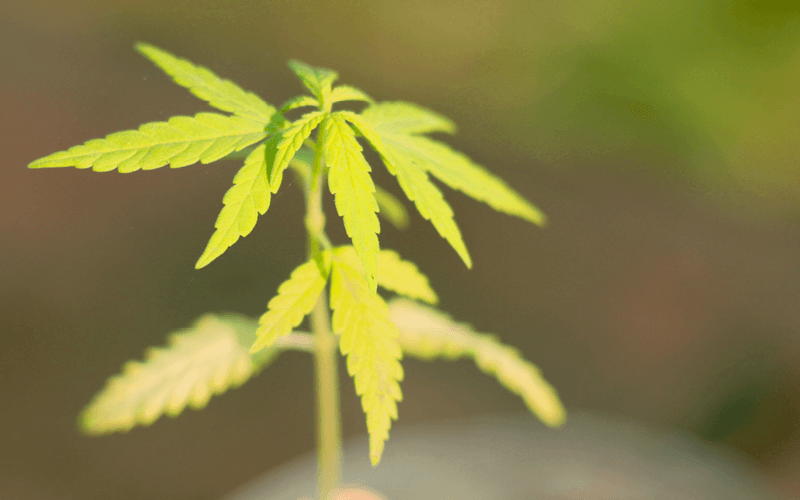 Iron deficiency first shows up in the new growth at the top of the plant.

So, the first step in correcting an iron deficiency is to reduce the pH to somewhere between 5.8 and 6.4. Once the pH is in the correct zone, the iron will become available again and the leaves will start to turn green.

To help prevent iron deficiencies during periods of fluctuating pH, the best hydroponic nutrients include iron in a chelated form. Chela means claw, so a chelate attaches to an iron ion like a claw, helping to keep it soluble in the hydroponic solution.

To know which chelate is used, check the label. The three most common synthetic chelates are EDTA, DTPA and EDDHA. EDTA is the weakest, DTPA is stronger and EDDHA is the strongest. EDDHA remains stable even at high pH levels, but it is much more expensive than the other forms. Most hydroponic nutrients include the iron in the DTPA form. 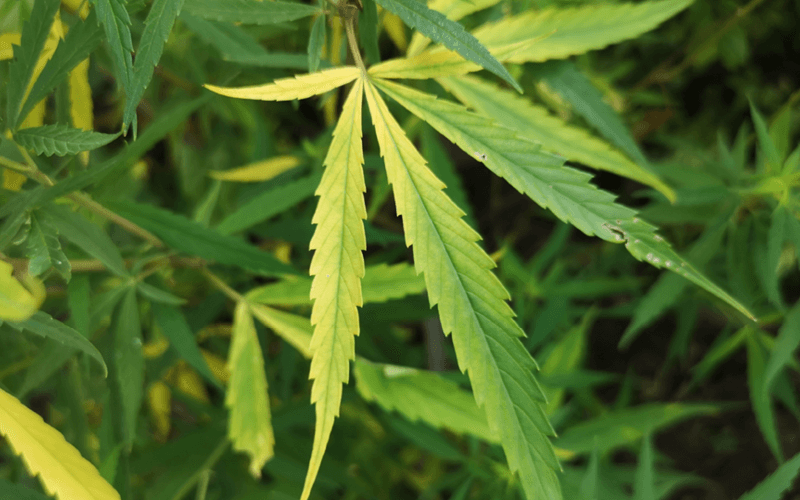 Nitrogen deficiency is much more common in soil.

I saved nitrogen deficiency for last because it is fairly uncommon in hydroponics, unless the EC of the nutrient solution is much too low or if carbohydrate additives are used. Most hydroponic nutrient formulas include nitrogen at luxury levels, so even using half-strength nutrients provides adequate nitrogen for most plants.

In hydroponics, avoid using sweet carbohydrate products in the reservoir, especially during the vegetative growth stage. Hydroponic nutrients have a high nitrate-to-ammonium ratio – usually about 90% nitrate to 10% ammonium.

If you add carbohydrates to the nutrient solution, the sugars feed micro-organisms, but a competitive advantage is given to the microorganisms that also feed on nitrates, converting them to toxic nitrites.

In some of my lab experiments using added sugars, the nitrate levels were reduced to zero in just a few days. Even the plants that didn’t show yellow leaves still performed poorly compared the plants that weren’t given any carbs.

Nitrogen deficiency is much more common in soil. Nitrates are water soluble, so overwatering can easily leach nitrates out of the root zone. Microorganisms in the soil can also compete with the plant for available nitrogen, especially if the soil has too high of a carbon-to-nitrogen ratio.

But generally speaking, nitrogen deficiency is more of a general yellowing, while magnesium deficiency is more strongly interveinal. To know for sure, take a leaf sample test. Easy-to-use tissue sample test kits are available for nitrogen and reagents will indicate high, adequate or deficient levels of nitrogen in the leaf tissue.

If there is a true nitrogen deficiency, you can try using a general-purpose grow formula to correct the problem, but to be even more precise, specific nitrogen-based fertilizers are also available.

Natural alternatives such as amino acids are also effective foliar sprays, but they usually take longer for the plant to respond.

If you’ve read this article and you’re still not sure what is causing the leaves to turn yellow, your best bet is to get help from the grow experts at your local hydroponic store. Good luck!